The layout of Arbitrary2D Environment is configured after the IR markers are physically placed on the working plane. Use the Environments tab in the AntilatencyService app to create or edit an Environment.

Let's take a look at the Arbitrary2D Environment configuration. It is assumed that the IR markers are already physically placed in the room and they are strictly in the same horizontal plane.
Try to keep a balance between the asymmetry and evenness of the marker distribution. This affects the main parameters of the Environment, you can read more about it in the Environment article.

To create a new Environment in the AntilatencyService app, click on the + button in the lower right corner and select the New environmentmenu item. Then select the Arbitrary2D type and specify an Environment name. 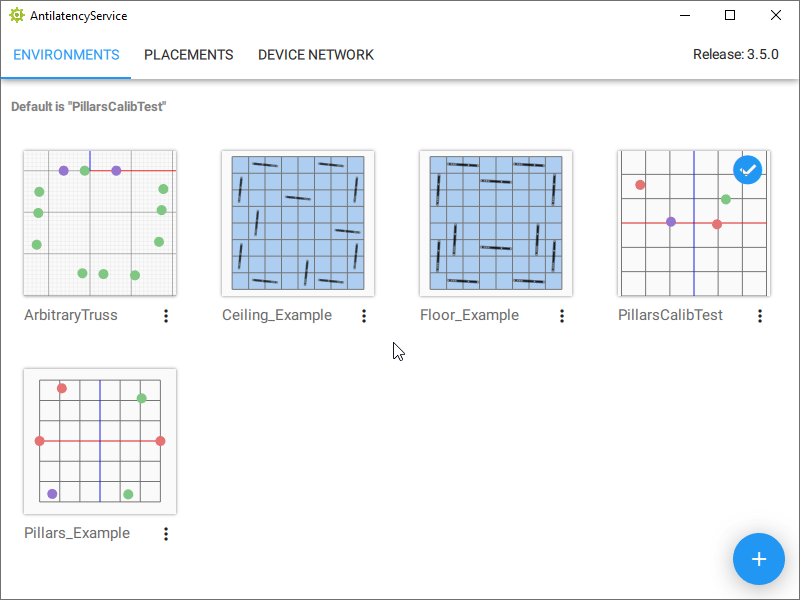 Then you should configure the Environment parameters: 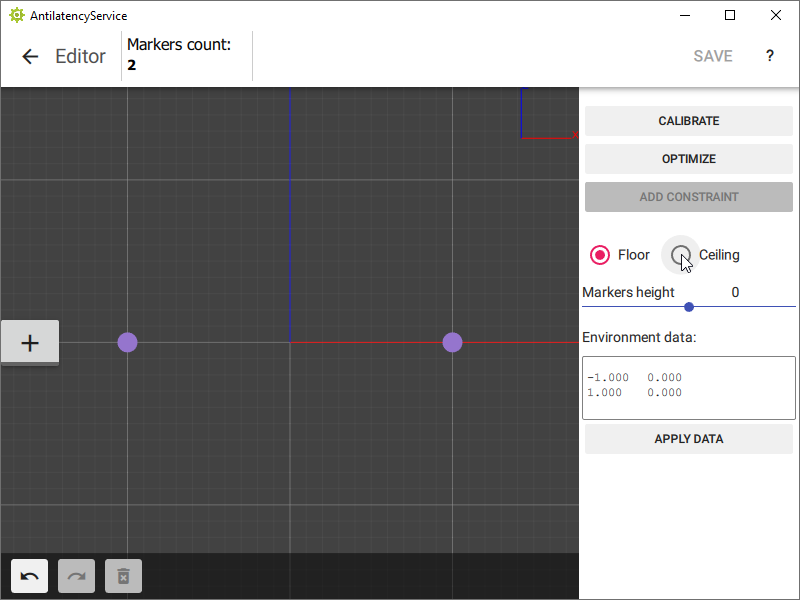 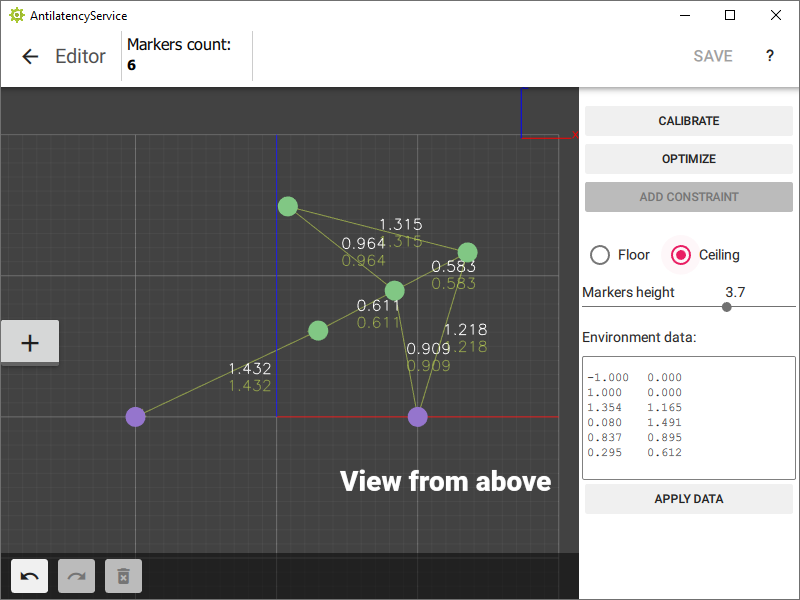 Placing the IR markers in the editor

The origin of the coordinate system is located between the first two markers. The step of the coordinate grid is 1 meter. These markers move synchronously along the X-axis only. They can be used to set the center or the edge of the layout.
Next, add the remaining IR markers to the layout. The order is not important, but try to keep their approximate relative position. There are two ways to add markers and change their position:
The top two rows in the Environment data text block are the coordinates of the first pair of markers. The rest are the green markers in random order. After making adjustments, click on the Apply Data button. 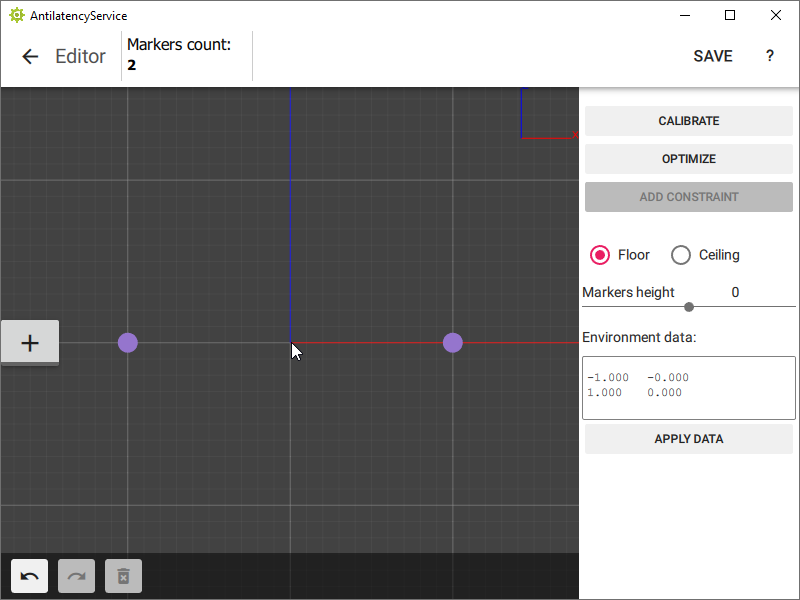 To align marker positions in the editor to their physical positions, optimize the layout. In order to do this, use the Constraints tool for marker pairs.
To create a Constraint, follow these steps:
An arrow with dimensions between the markers will appear. The upper number is the measured distance between the markers, and the lower number is the distance on the layout. 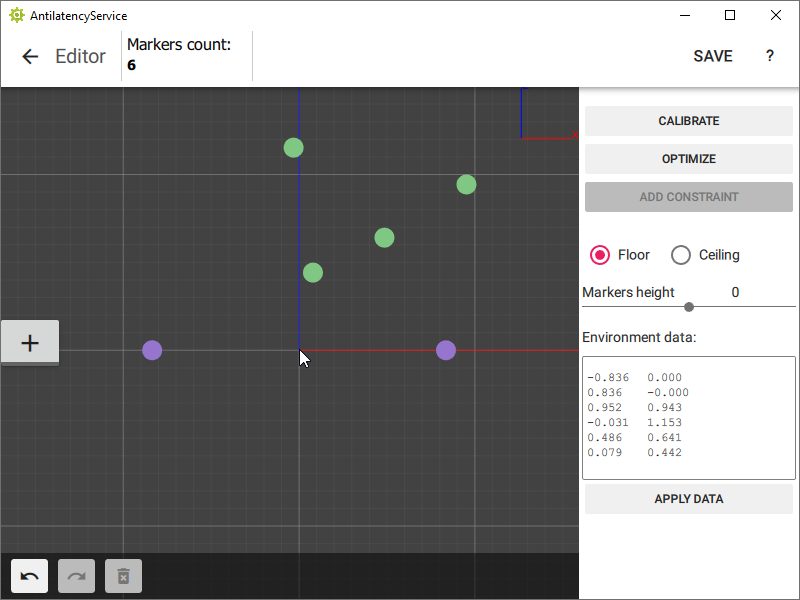 Repeat the process for the remaining pairs of IR markers. For optimization to be effective, the Constraints' lines must form a rigid shape. The more measurements there are, the better; we recommend at least three for each marker.
Measure the distances between the markers, which correspond to the different colored markers on the layout as accurately as possible! 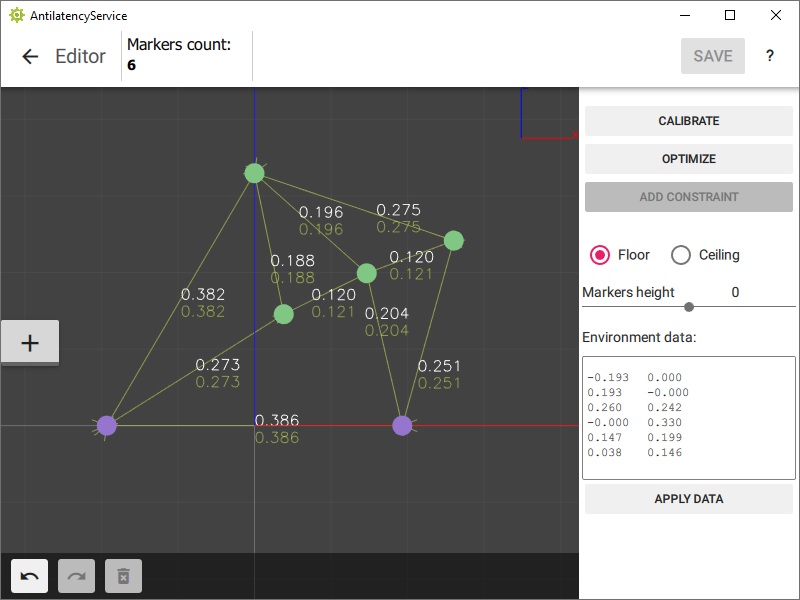 After you have made all the measurements and added them to the Constraints on the layout, click OPTIMIZE to automatically correct the position. Make sure that all the Constraint lines have turned green.
Remember to save the layout changes (the SAVE button in the upper right corner).

Calibration can’t be used instead of layout optimization! It corrects the position of the IR markers on the layout only if they slightly deviate from their actual location.
To perform an Environment calibration you will need: an Alt, a Universal Radio Socket and a Tag or a Bracer. 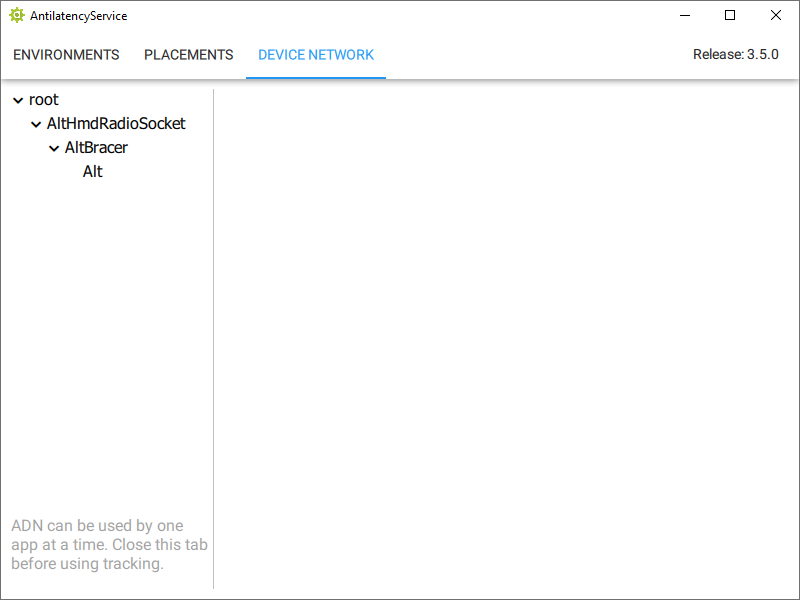 Next, take a Tag or a Bracer with an Alt and prepare to walk around the tracking area while calibrating. You must move the socket so that the Alt sees the tracking area from as many angles as possible (different positions and rotations).
You can see how accurately the beams from the Alt tracker hit the markers by moving the slider along the selected sample line. If no beam hits a marker, then the distances between this and other markers should be measured again.
If no tracking data has been captured during calibration, try to measure the distances between markers more accurately or inspect the layout for features. If the measurements were carried out with a lot of errors, the Alt tracker will not be able to match the layout and the actual location of the markers. 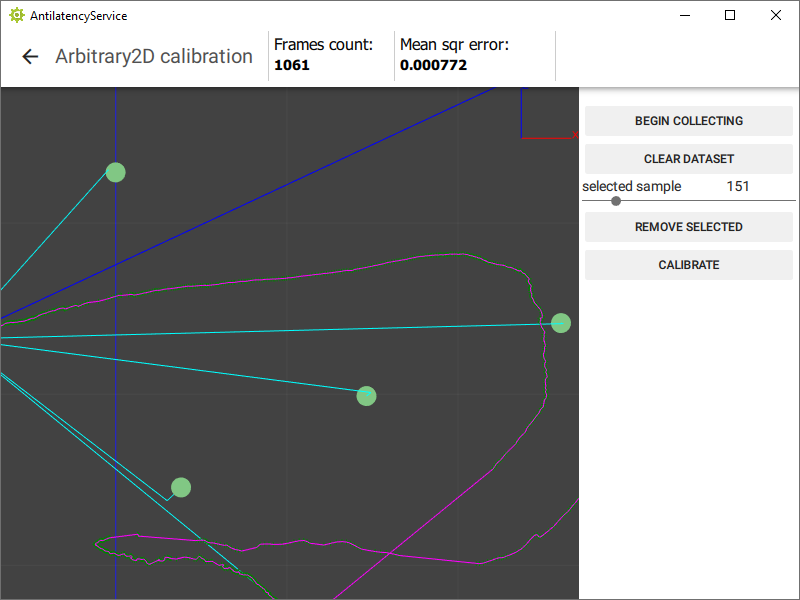 The calibration is successful if most of the beams enter the markers accurately and without deviations when approaching, and the Mean sqr error value has significantly decreased or is equal to 0. After successful calibration, click the back arrow and the APPLY button in the pop-up window. Then save the changes (SAVE button).
Now the Arbitrary2D Environment layout corresponds to the actual location of the IR markers in the room. The configuration of this Environment is completed.
Remember to set your layout as a default Environment. You can see the instructions in Environments.